The myth of the "Aryan tribe" 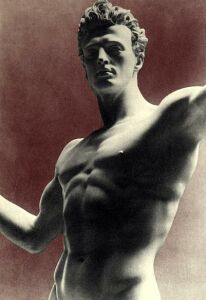 The fair-haired, blue-eyed Aryan settling in Northern Europe and being of superior status due to his genetically pure race was the product of many intellectual influences, e.g. the establishment of the Indo-European Philology to name only one. Leon Poliakov showed that the roots of such caricature reach far back into the past and that the desire to have ancestors as illustrious and grand as possible can be found with all European peoples. The Romans believed their ancestors to origin from Troy, while the medieval Spanish aristocracy put emphasis on their superior Visigothic blood which not only made them different from their subjects but also put them above them. The French continue to become chronic schizophrenics as soon as they are to decide whether they are descendants either of Vercingetorix and the Gauls (Celts) or of Charles The Great (Charlemagne) and the Franks (Teutons). Some English seemingly not satisfied with their mix of Briton, Anglo-Saxonian, Viking and Norman predecessors still found it necessary to have one lost tribe of Israel driven to their coasts in order to make sure they have even older and religiously more important ancestors.

Now the Germans meant to see the roots of their own history in the changes caused by the very migration of the peoples that had caused the illustrious ancestors of their neighbors. Considering that even Tacitus mentioned that the Teutons were "of pure blood", not at all mixed with other races and (therefore) authochtone, there seemed to be hardly any reason to doubt their Northern European origin. When the Church needed a relation to the bible, Ashkenaz, one of Japhet's grandsons, was found who discovered a way to Northern Europe and thus established the Teutons even within this frame. Especially during the time of Reformation one was proud to be different from the degenerated and corrupt Roman world. During the 18 th and 19 th century, the belief in Germanic authochtony and in the power of the Nordic peoples became stronger and stronger, supported by the industrial and intellectual rise of the "Germanic"-speaking countries. This belief was also supported by various findings of research in the field of anthropology as well as in the field of comparative linguistics. (1) The concept of race theory developed simultaneously with the rise of anthropology. Once having isolated the various human races as a theorem, Western scholars could not resist to place their own "Caucasian" race above the others. Soon "race" was mistaken for or identified as ethnic group, nation and language. History was reduced to a number of races each holding the power for a certain period of time until they lost it to another, stronger one that had "more energy". In blatant misunderstanding, Darwin's theory of evolution was transferred to everything that seemed to be subject of development in some way, be it races.

2. The Discovery Of the "Aryans"

The discovery of the Indo-European language group not only enabled science to track the historical relations between many European and Asian languages. It was also once and for all the end of the idea that Hebrew was the original language of all human beings and also of the idea that all human beings are descendants of (one) Adam. As a result the Western scholars searched for their own illustrious forefathers in Central Asia, Persia and India following the traces of Indian and Iranian traditions. Indo-European research started as early as in the first decades of the 19 th century, and Max Müller and other Indo-Europeanists happened to use the word "Aryan" to describe the old Indo-Europeans. As a matter of cause these early Aryans had to be members of the superior white race if they were to represent the ancestors of the modern Europeans. In addition, early linguists made the mistake to interpret and even to evaluate the linguistic classification of languages into analytic, agglutin and flective languages in an evolutory manner. Thus, it were again the Aryans, i.e. the Indo-Europeans, which seemed to be superior to other races as they had developed language to the allegedly highest evolutory level a long time before the others. Canon Isaac Taylor once was of the opinion that the Indo-Europeans represented an "advanced Finish race" (2) . So superior physiology, language and culture were allocated to the term "Aryans" and it was assumed that those belonged to the white race - but still their Urheimat was not yet defined to be Northern Europe. So far, the Aryans were associated with the Hindukush or the Himalaya. But as early as in 1870 Lazarus Geiger argued that the very fact of the Aryan being blonde and fair-skinned proved Central Europe, i.e. Germany, to have been his Urheimat. However, it was Theodor Poesche who popularized the idea that the Aryans originally came from Central or Northern Europe respectively. Looking for the Urheimat he used means like the frequency of albinism (!) and so the Aryans found a home in the swampy areas of Eastern Europe. An area hostile to life as the original home of a race thought to be more able to survive than others? Karl Penka did not have a problem to accept this in 1883. Yet, by means of all sorts of scientific disciplines he moved the Aryans to Scandinavia and pointed out in his already very polemic works that no other place on earth could be the Urheimat of the Aryans. Despite his polemics, Penka's works were widely accepted. Even well-known anthropologists like Rudolf Virchow and Thomas Huxley agreed that the Aryans are a race of "blonde dolichocephals". The great indologist Max Müller, disgusted by this development he had partly induced himself, insulted anthropologists who talked of "Aryan race, Aryan blood, Aryan eyes and hair" as scatterbrains and compared them with linguists talking of "dolichocephalic vocabulary or brachycephalic grammar". To him "Aryan" was but a name for a language group that had nothing to do with the peoples speaking these languages without even being actual peoples. But it was too late already. The idea of a superior Aryan-Nordic race had settled in the heads of too many scientists, and amateurs were satisfied with sciolism enjoying to think themselves descendants of true super ancestors. 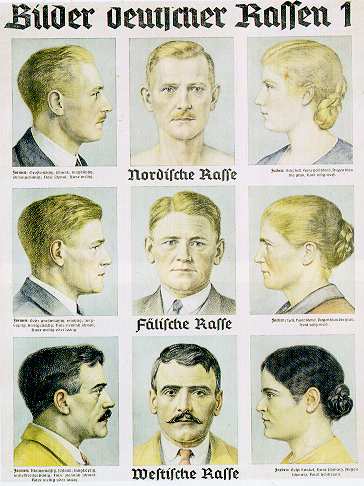 "Pictures of German races" The Aryan Myth, driven to extreme with German thoroughness.

3. The Second World War And Its Consequences

Until the end of the war, only one European Urheimat was accepted in Germany. The dispute was restricted to the question, whether it was Northern Europe (3) or rather a steppe area like the ones in Eastern Europe (4) . But also abroad a European Urheimat was favored, only few thought the Indo-Europeans to origin from Asia. Still, a linguistic term was mistaken for anthropologic, political-ideological and romanticized contents. It was the Second World War and its results which forced the academic world to change their way of thinking as the political effects of unscientific working methods became apparent. The myth of Aryan superiority was a widespread phenomenon of varying distinction, usually more obvious in anthropological publications than in linguistic ones, until the political consequences (eventually) made it an anathema in the academic world. Having been heavily incriminated and abused by the Nazis the linguistic term "Aryan language group" was no longer acceptable. Modern research considers "Aryan" merely in connection with the Iranian and its preliminary stages. "Indo-Aryans" are seen as precursors of e.g. the Persians. "Genetic purity" was banished to the realms of myth. Yiddish is as much an Indo-European language as any other Germanic dialect and the language of the Roman gypsies is much closer to "Aryan" than any of the Northern European languages. The "tree-branch"-principle of development adopted from archaeology was given up to favor a theory of development with "overlapping" boundaries. It was understood that any influences surrounding and crossing a language area transform the development of a language, and - even more important - that although language usually provides cultural information it does hardly allow anthropological conclusions. This is confirmed by the fact that Indo-Germanistic science has made great strides since it returned to a dispassionate level of scientific work. 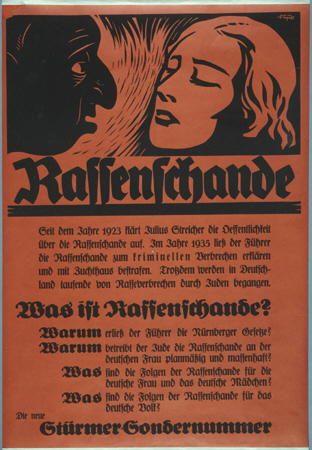 "Race Shame" - sexual contact with "Non-Aryans" - was in Nazi view a'] ['serious crime!

[1] e.g. linguistic research by the Brothers Grimm etc. . [2] Finno-Ugrian is an agglutin language, i.e. evaluative suffices are attached to root words that remain unchanged. [3] among others represented by the archaeologist Gustav Kossina and his followers, by the linguist Hermann Hirt and many others mostly trying to "prove" the Nazi ideology in a pseudo-scientific manner though. [4] Otto Schrader, Sigmund Feist, Alfons Nehring, Wilhelm Brandenstein, Wilhelm Koppers.

Note: This text does not only contain important information for everybody concerned with the problem of pseudo-religious (and especially pseudo-"Germanic") racism but is also a historical document. It represents, as an example, critical research and study which provided main building-blocks for the Ariosophy Project that was founded in 1996. Studies like this one and critical observation of the "pagan scene" in Germany were crucial for processes that resulted in the founding of the Rabenclan and the Nornirs Aett. In order to preserve the "work-in-progress" character of the Ariosophy Project, the English versions of older texts will not undergo any change in the light of recent discoveries. Notes like this one will provide the necessary background informations. The term "Germanen", which is in German not a synonym for "German" (Deutsche) was represented by "Teutons" in order to avoid confusion.